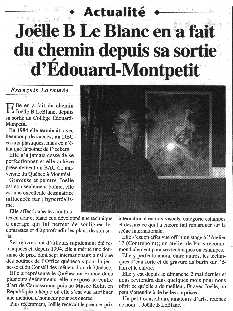 Joëlle B. Le Blanc has come a long way since leaving Édouard-MontpetitCollege. In 1984 she successfully graduated with a DEC in Plastic Arts, but it was onlythe tip of the iceberg. She never stopped improving and is presently finishing a Bachelor’s Degree atthe Univerté du Québec in Montreal.

Engraver and painter, Joëlle is not only good, she’s an excellent drawer influenced by the hyperrealism trend. She particularly likes black and white contrasts and has developed an inking technique that allows her to emphasise contrasts and better detail her subject’s outlines. Moreover, her works quickly drew attention and since 1994 she has been awarded a dozen prizes including 7 at the international level as well as grants from the Office québécois pour la jeunesse and the Conseil des métiers d’art du Québec. She has represented Quebec in France in several events, has exhibited her works at the Carcassonne Art Centre and at the Kolin Museum in the Czech Republicwhere she received an honorary mention for her ink works.

More recently, Joëlle received the international first prize in visual arts, in the engraving and drawing category, which again has drawn attention to her work on the international scene.
She was in fact offered a stage at Workshop 17 (Atelier 17) (Countrepoint), a Paris workshop that is renown worldwide for its engraving techniques. Among other things, she will further improve etching and burin engravingtechniques on pewter and brass.

She has been in Paris since Sunday May 2 and will come back in a few months to offer us her best works, and with Joëlle, we can expect a few nice surprises. Here’s a little tip for art lovers, remember this name… Joëlle B. Le Blanc.