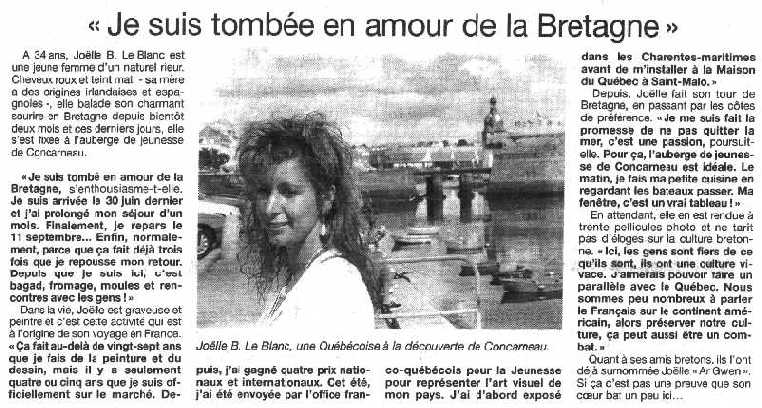 At 34, Joëlle Leblanc is a young woman with an easy smile. Red hair and mat complexion – her mother has Irish and Spanish origins -, she’s been parading her lovely smile in Brittany for close to two months now and has just recently settled at the Concarneau youth hostel.
“I fell in love with Brittany, she declares enthusiastically. I arrived last June 30th and extended my stay by another month. I’m finally leaving on September 11… At least I’m supposed to, but I’ve already postponed my return home three times. Since I’ve been here, it’s been bagad, cheese, mussels and meeting people!”

Joëlle’s trip to France was initiated through her work as an engraver and painter. “I’ve been painting and drawing for over twenty seven years, but I’ve only officially been on the market for the past four or five years. Since then, I have won four national and international prizes. This summer, I was selected by the Office franco-québécois pour la Jeunesse to represent my country’s visual art. I first held an exhibition in the Charentes-maritimes before settling at the Maison du Québec in Saint-Malo.”

Since then, Joëlle has been visiting Brittany, preferably travelling along the coast. “I promised myself not to stray from the sea, it’s a passion, she says. That’s why the Concarneau youth hostel is perfect. In the morning I can cook my breakfast while watching the boats go by. My window is a real painting!”

Meanwhile she has taken thirty rolls of film and has fallen in love with the Breton culture. “People here are proud of who they are, they have an undying culture. I would like to compare it to Quebec. Because there are few of us who speak French on the American continent, it can also be a battle to protect our culture.” As to her Breton friends, they have already named Joëlle “Ar Gwen”. If this is not proof that her heart beats a little here…